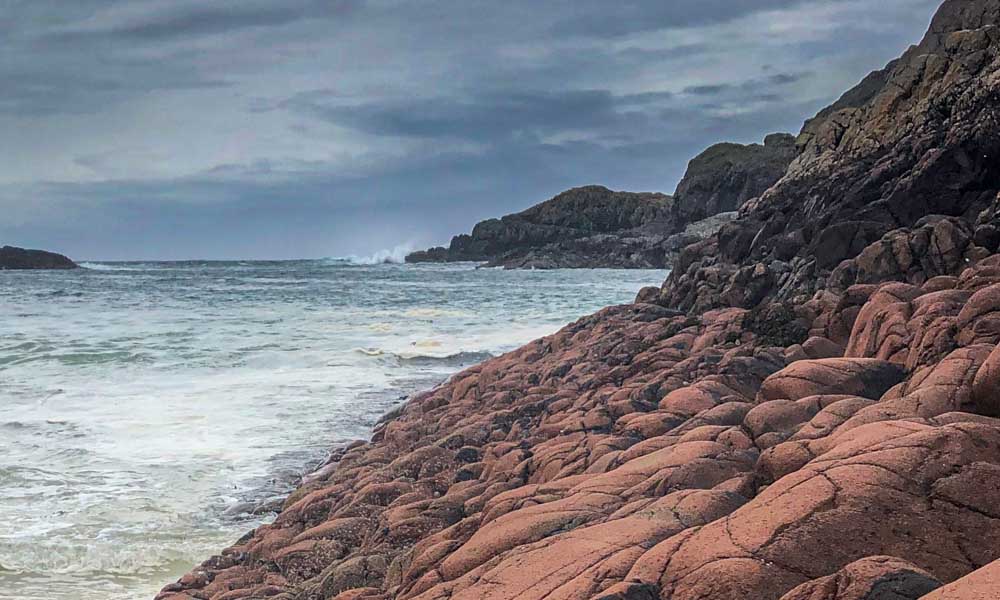 Scuffing my way toward Bahn Thai Express in Fairbanks, Alaska, I find myself on a collision course with a hunched-over man. In the 9 PM daylight of arctic midsummer I can see the folds and stitches in each item of his uniformly black clothing: denim pants, leather shoes, canvas vest, and spike bracelets on each wrist. Recoiling, I slow my step to avoid a shuffle-dance at the door. When he does the same my belly button contracts in exaggerated discomfort. He glances at me and I look down to remind myself what he sees: holey approach shoes long turned the color of dirt, patched jeans, a navy cable knit sweater crossed by a batik purse. I’ve just gotten off the 12-hour train ride from Anchorage, where I worked for an outdoor education company, and my hair is unbrushed.

Despite our best efforts, we reach the door simultaneously. As we each gesture for the other to go first, I remember the store-bought joint in my pocket and take a step backwards. Into my hesitation, he suddenly grabs the door handle and pulls the door open for me. His vest falls open and I see his chest is emblazoned: the Fox News logo appears, silk-screened onto his t-shirt.

Inside, we are each quickly seated, one after the other, alone at separate tables. I hear him order a thai iced tea and chicken pad thai. I order vegetable red curry. That done, I rotate my water glass—large, perspiring, full of ice—and take a slow sip before standing up. He reaches into his pocket and I freeze, but all he pulls out is a smartphone. Glancing toward the door, I hesitate, breathe out, and walk over to stand above him.

“Do you want some company, or would you rather eat alone?” I ask.

“I just came from Affordable.”

“The used car dealer, I work there. Just washing cars.”

“Ok. But should we eat together, or do you want to be by yourself?”

“I’m going to go for a smoke first. Be right back.”

When I slide into the chair across from him he doesn’t look up from his hands, clasped on the black, lacquered table. I say my name and he says his. We shake hands, my elbow hitting the table’s chipped edge.

“How old are you?” I ask him. I’m lightheaded, emboldened, journalistic. I know already he’s very young; this gives me confidence.

“I guess. It’s too hot now though, and so sunny.” It’s seventy degrees out, tops. “I like the winter better.”

“Do you snowmobile or something?”

“No, the ski resorts are always closed by the time I get off work. I play video games and watch a lot of YouTube.”

“They go around filming stuff, because you’re supposed to be allowed to do that anywhere,” he says.

“There’s still some fake stuff on it, but it’s not as fake as the other places.”

I consider this. “It’s hard when you don’t know what’s fake and what’s real,” I offer.

“Yeah,” he says, looking me in the eye for the first time before dropping his gaze quickly back to the table. His tinted glasses remain fog-grey even inside.

“So what video games do you play?” I ask him. He names a few. I’ve never heard of any of them. “I used to play Sims,” I offer. He shrugs. “Earthworm Jim?” No answer.

“My dad doesn’t like one of my zombie games,” he says. “He says it’s just destructive. But my mom watches me play sometimes.”

Our food arrives. He swirls his fork around on his plate and I wonder if it’s possible to eat Thai food like an Italian.

“I also use YouTube to thank police officers,” he says out of the side of his mouth, chewing.

“Like I write them messages. Thin blue line stuff.”

He pulls out his phone, flips it over onto the table. On its back is a black and white sticker of the American Flag with one of the stripes turned blue. I notice a black gummy bracelet on his wrist, next to the spikes. A blue line encircles it as well, broken up by the word, Grandson.

“Thin blue line, it’s like blue lives matter. My Grandpa was a cop. Uncle, brother, too.”

I look up thin blue line later. Wikipedia defines it as a phrase referring figuratively to the position of police in society as the force which holds back chaos, allowing order and civilization to thrive.

A few bites are swallowed in silence. He fidgets. I watch him. I watch him gently, I assure myself.

“My boss talked to me after work today,” he says. “He told me not to dress so gothic. Baggy pants, spikes. And not to live so gothic either.”

“He thinks I should be happier. And that it doesn’t look good.”

“Is being gothic a lifestyle, or what?”

“Yeah, a way to dress, but also it’s about being dark and depressed.”

He’s quiet for a moment. “I get sad sometimes, like when people are unreliable. My sister, or people. I do a lot of things alone.”

“I feel bad for being mean to her when we were younger.”

“Do you know who you’re going to vote for next time?”

“My parents don’t like paying for Obamacare. I mean, I’ll pay for disabled people or veterans, but not for drug people or people who just don’t want to work.”

“What about disabled people who get into drugs?”

His gaze jerks up, teeth materialize to tug at his bottom lip. Seconds pass. “Yeah, that’s understandable I guess.” He exhales; I wonder what experience he’s drawing on. “Just not drug people or people who just don’t want to work.” He nods to himself. “Are you voting for Trump?”

It’s my turn to be startled. “What, no!” Appalled, perhaps even insulted, I choke back a laugh, yet as I look at him I feel suddenly protective—how much longer before he’ll become one of us, categorizing everyone on sight, unconsciously convinced he could pick his enemies out of a line-up of strangers?

“Oh.” He looks genuinely surprised, and we make eye contact again. I smile, no teeth.

“Is there anything he could say that would make you change your mind?” I ask.

He thinks about it. “Probably. I don’t know what though.”

“What do you think about climate change?”

“I don’t really care about it. Some of my neighbors had to evacuate because of a wildfire this summer but we didn’t.”

“Have you ever learned about it?”

“A little bit in, like, seventh grade. The teacher wasn’t very good though, or wasn’t a good teacher. My whole school wasn’t good.”

“So you don’t think it matters?”

“I won’t care unless it’s threatening me personally.”

We chew a few bites.

“But if we’re worried about illegals,” he begins suddenly, eyes now bright and focused on mine, “we need to build a wall between the U.S. and Canada, too. Not just Mexico.”

I stare at him, forget to chew. His eyes skitter.

“If we’re worried about illegals,” he trails off.

Laughter would not be an appropriate response, indignant or otherwise. I take a slow breath.

“So you don’t have many friends?” I ask. I just came here to eat curry, and then I followed an impulse. I am not here to convince, or to argue policy. Am I?

“Well, I’m really busy.” Pause. “With work and stuff, plus, you know, YouTube videos, and I play a lot of videogames.” He looks up at me. I smile unobtrusively. “I lived in Washington last year, but I didn’t know anyone there either. I’d take my videogames to a dry river until three in the morning most nights. It was nice and dark.” He looks out the window—it’s not even twilight at 10 PM.

“Ok.” His fingernails are exceptionally clean; it’s easy to imagine them holding a game controller. “Have you heard about factory farming?”

“No, I’ve only played Farming Simulator, but I don’t really like it.”

I don’t correct him.

“I used to play videogames with my sister, but she doesn’t want to anymore. I’m trying to be easy on her because she just broke up with her boyfriend.”

“I’m friends with a few bus drivers and stuff though, on Facebook. One of them drove me to McDonalds instead of the bus stop once, so I thanked him for that and we became kind of friends. I filmed it.”

“What?” I’m starting to feel like a broken record.

I look up Auditing America later. We love our country, their YouTube channel says. We do “right to film” audits to protect your rights. We do not break the law. We are not anti-government or anti-police.

“I film trains sometimes, too, or ships. Anything. We’re allowed to film anything that’s public.”

I finish my curry, scraping up the last coconut-milk-fattened rice grains with a fork to avoid using their shrink-wrapped plastic spoon. Our checks arrive and I pay mine.

“Are you doing anything for the Fourth of July tomorrow?” I ask him.

“I was going to go to my grandma’s, but I think I’ll just stay home. She gets scared when I wear my spikes. So I guess I’ll do my own thing, drive around or something.”

“You don’t want to just take your spikes off?”

“I like them. It’s one thing for my boss to tell me, but I don’t want anyone else controlling what I wear.”

“I can understand that,” I tell him. When our eyes meet his linger.

“There was a pedophile on the street the other day,” he says. “I was walking with my friend, she’s like sixteen, and this woman said we were cute.”

“I guess she meant cute together, like a pile of puppies.”

“My aunt is a pedophile, too. She’s always telling kids they’re hot.”

“And pulling the ribbons on their dresses.”

“You do?” He nods, chews. “Like, if there were a rule that you couldn’t eat any more chicken, you would follow it?” I wonder. He nods again. “That you could only drive, say, fifty miles a week?”

“Yeah, I don’t drive much anyway. I had a car since high school, but it’s never been full of people. To drive to lunch or whatever. I never went with anyone either. They never invited me.”

“I’m sorry.” He looks up from between hunched shoulders and doesn’t look away. His cheeks, brushed with sunburn, darken further.

“There’s a lot of drug people downtown, too,” he blurts. “They’re the only ones I ever get aggressive with, when they get too close. I just like how spikes look.”

The waitress comes to ask him to pay—she wants to close the register.

We walk outside and I turn to him.

“Thanks for eating dinner with me,” I say. And then, over my shoulder as I turn away: “Enjoy your evening.”

I turn back. “I live in Germany. No service here.”

He looks at his feet, rotates one onto its outer edge. “Oh, ok.”

I write it down for him, and when I get on the internet an hour later an email is waiting for me.

Want to come over sometime? He asks. I write that I’m leaving tomorrow, and he replies a minute later: Will you come back?

Miranda Perrone
is an environmental scientist, activist, writer, and outdoor educator with an MS in Environmental Science & Policy and a BA in Philosophy. Through her varied work, Miranda engages with issues related to climate change, animal rights, and the preservation of wild places.