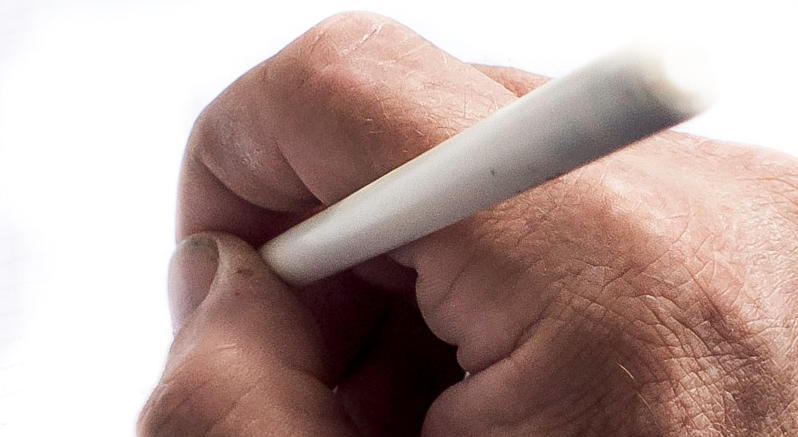 He now stood without a chair in the warm breeze blowing from the hole he’d created in an attempt to burst through writer’s block. He still felt none the better. He had hoped that his moment of insanity would help get his creative juices flowing again but no words poured out. They remained hidden somewhere in his mind. Stupid words and their refusal to escape his head.

Defeated, he retrieved another folding chair and sat down in front of the blank page again. Maybe he needed a drink or a dozen drinks, something, anything to help him relax and let the words escape. He would do anything.

He was looking down at his book, wallowing in his own misery, when a hand grabbed his shoulder. He didn’t hear the footsteps. He looked up, figuring he was about to be thrown out of the building for his uncivilized action but nearly shit his pants when he saw the person attached to the hand: a large man with half his face eaten away, his shirt bloody from the open wounds in his chest.

“Brains,” the man attempted to say but with only half a face, his words came out a little off. Then the man proceeded to take a bite out of Henry as casually as if he was a buffet meal. Henry’s blood finally filled the empty page. Henry smiled as the large man devoured his flesh. The blank pages he hated so much were being filled. He began to laugh until the zombie ate his lips, then he began to scream as his consciousness faded away.

When Henry awoke the first thing he noticed was the lack of pain. Then the hunger came, overtaking everything else. His stomach rumbled in anger. He arose, causing his entrails to spill out on the floor from the wound in his stomach. He stumbled through the window ignoring the shards of glass that were still attached. He shuffled down the sidewalk, making his way to the restaurant down the street. He could sate his hunger there. Halfway there he came to an abrupt stop.

“Brains,” he mumbled, still struggling to move forward, but he couldn’t move. He turned back and saw a string of entrails leading away from his belly toward the open window. It seemed his intestines had snagged on a shard of glass from the window frame he walked through.

He got a whiff of something enticing and without a thought he reached toward his taut intestine and brought it up to his mouth. At first it was too tough for his exposed teeth to pierce then finally, with much determination, he broke through the outer layer and began to feed. They tasted so good. He moaned with pleasure.

Now free and slightly purged of his hunger he resumed his trek to the restaurant. The aroma coming from the packed restaurant caused him to feel as if he’d never eaten before, his meal moments ago already forgotten. He shuffled toward the aroma. So much food, so near and he was starving. Saliva dripped out of his mutilated mouth as he approached the entrance.

He mumbled “brains” over and over as he neared the building and knew he would fill the void soon.