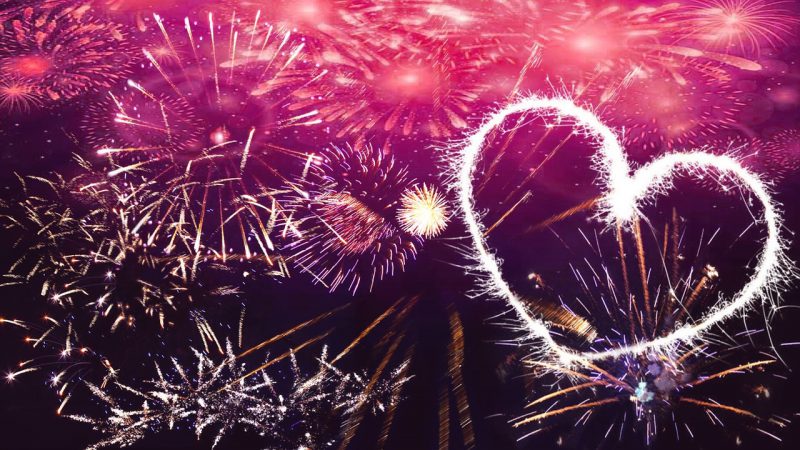 With a bang that I think you could hear from this side of the river, Summer Writers’ Week returned to Manhattanville College the last week of June after a 2-year hiatus, bringing an invigorating infusion of craft development talks, readings of new work, and inspiring discussion to local writers. Workshops in poetry, nonfiction, fiction, YA fiction, and dramatic writing formed the week’s backbone, led by Melissa Tuckey, Michael McGregor, Mitchell S. Jackson, Meagan Brothers, and Sharbari Ahmed. Additional talks and readings featured a keynote reading by PEN/Faulkner Award winner Joseph O’Neill.

In keeping with Manhattanville’s tradition of inclusivity and community engagement, this program overflowed with offerings that were free and open to the public, including not only the keynote reading, but also intimate readings and craft discussions with Carl Potts on the Graphic Novel; Dan Zevin on writing comedy; Con Lehane and John Langan in writing genre fiction, particularly mystery and the fantastical; Rivka Galchen, who reprised a recent presentation for NPR on cross-genre works; New York Times book review fiction editor Greg Cowles on the art of writing reviews; Suzanne Parker on structuring the poetry manuscript; Kristin Prevallet on writing and the mind-body connection; and Alan Felsenthal of the Song Cave on starting a small press.

END_OF_DOCUMENT_TOKEN_TO_BE_REPLACED 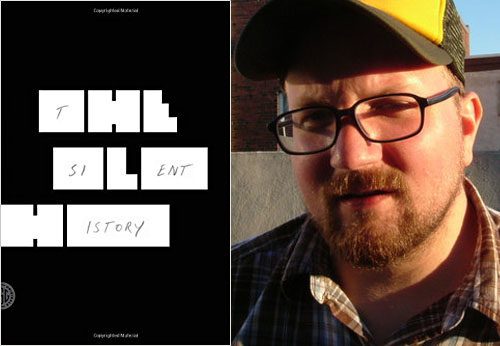 This weekend, Cuppa Pulp Writers’ Space welcomes Matthew Derby for the River River biannual Lodestar Reading. His recent novel, The Silent History, co-authored with Eli Horowitz, Kevin Moffatt, and Russell Quinn (Farrar Straus and Giroux 2014), was originally conceived as the first major exploratory interactive novel designed for digital platforms.  In this interview, Sylke and Matt discuss reaching beyond the boundaries of print media to tell a rich story about children, language, and the questions addressed in the novel that made him delve into unconsciously held thoughts and feelings about his late sister.

The Guardian called The Silent History “A compelling story about difference, rights and power”; Wired called it “Entirely revolutionary.” Matt’s work has also appeared in The Anchor Book of American Short Stories, Dzanc’sBest of the Web 2009, McSweeney’s, The Believer, Guernica, and elsewhere. He is also a designer for Harmonix, a video game studio in Cambridge, Massachusetts.

SJ: Is there any moment or experience in your childhood that you’d point to that opened the door to the kind of work that you are doing now?

MD: I grew up in a big Catholic family. I had six siblings, most of whom were significantly older than me. By the time I was six, all but two of them were already in college. They left a lot of stuff behind in the house when they went away – mostly books and records – and I pored over these materials like an archaeologist struggling to understand an ancient civilization.

The Beatles were the one thing all of my siblings seemed to have in common, so I spent most of my time listening to their records and reading the many books we had about them. I became fascinated with the ‘Paul is dead’ conspiracy theory, and spent many afternoons scaring myself silly looking for the clues about his death scattered throughout their recordings. One day, I read that, if you played the very end of “A Day in the Life” backwards, you could hear, instead of an orchestra reaching a spastic climax before hitting a single, unforgettable note, the sound of Paul’s car skidding and crashing in the moments before his death. I went straight to the record player and spun the record in reverse, and what I heard sounded astonishingly like a car crash.

END_OF_DOCUMENT_TOKEN_TO_BE_REPLACED 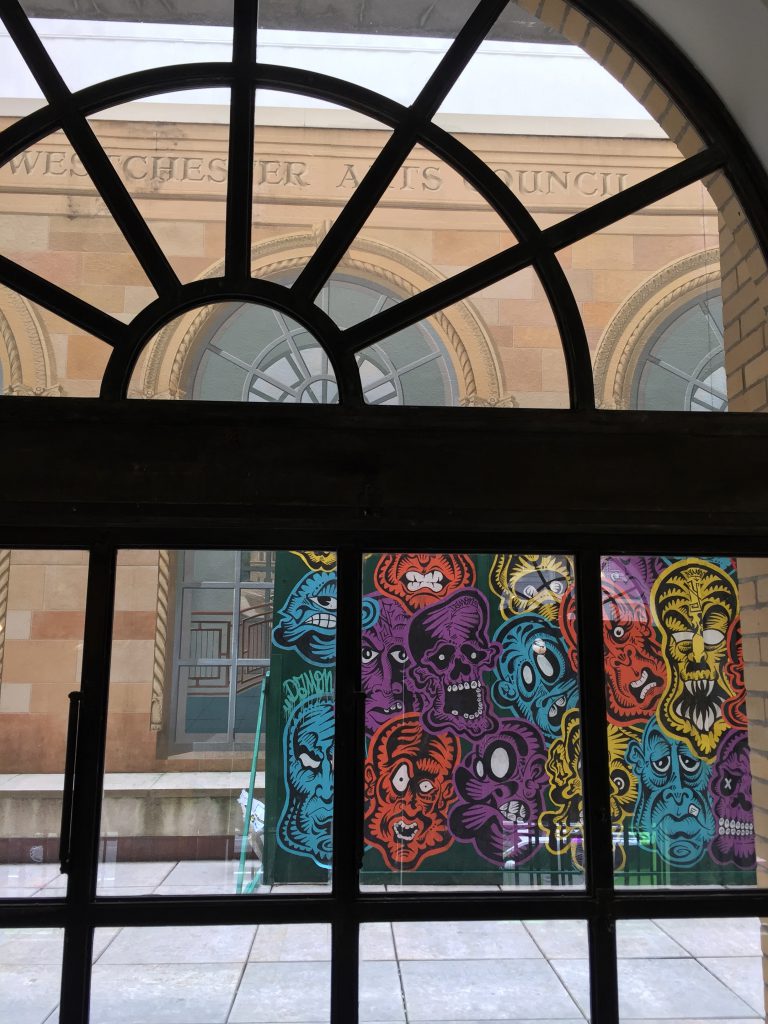 We’re looking forward to our next trip to ArtsWestchester’s “From the Streets” on Saturday, July 8, for a private tour and writing session. Mark this one on your calendar and RSVP here. At the invitation of ArtsWestchester’s Megan Thomson Connor, a River River regular, Donna and I visited on a recent afternoon. 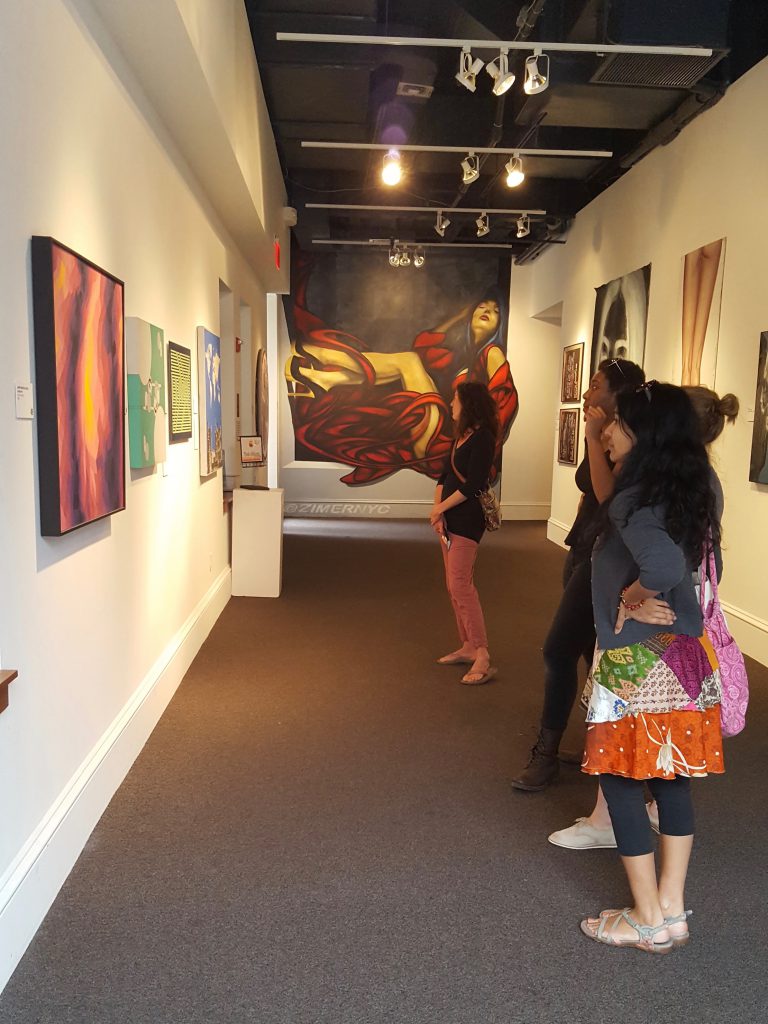 From this exhibit of work by “wall writers” of the early graffiti and urban art movement up to the present day, we learned a bit about how the artists form and interact with their communities & their neighborhoods, approach materials & iconography, incorporate identity & signatures, handle property disputes, and face the challenges posed by art collectors and curators. 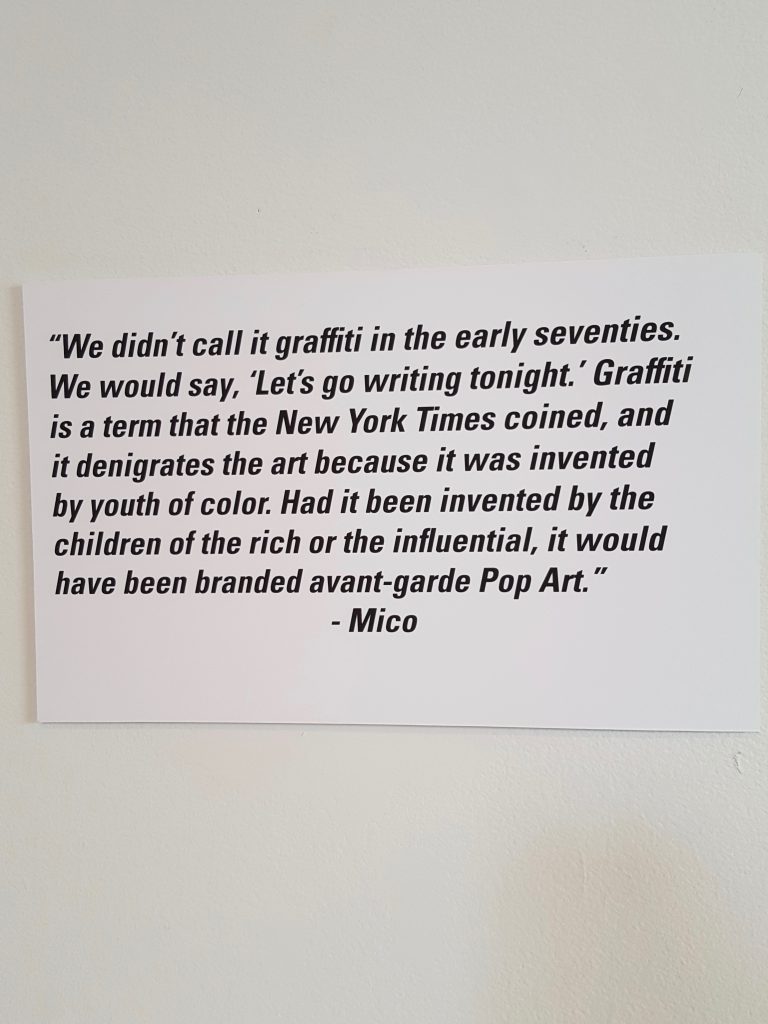 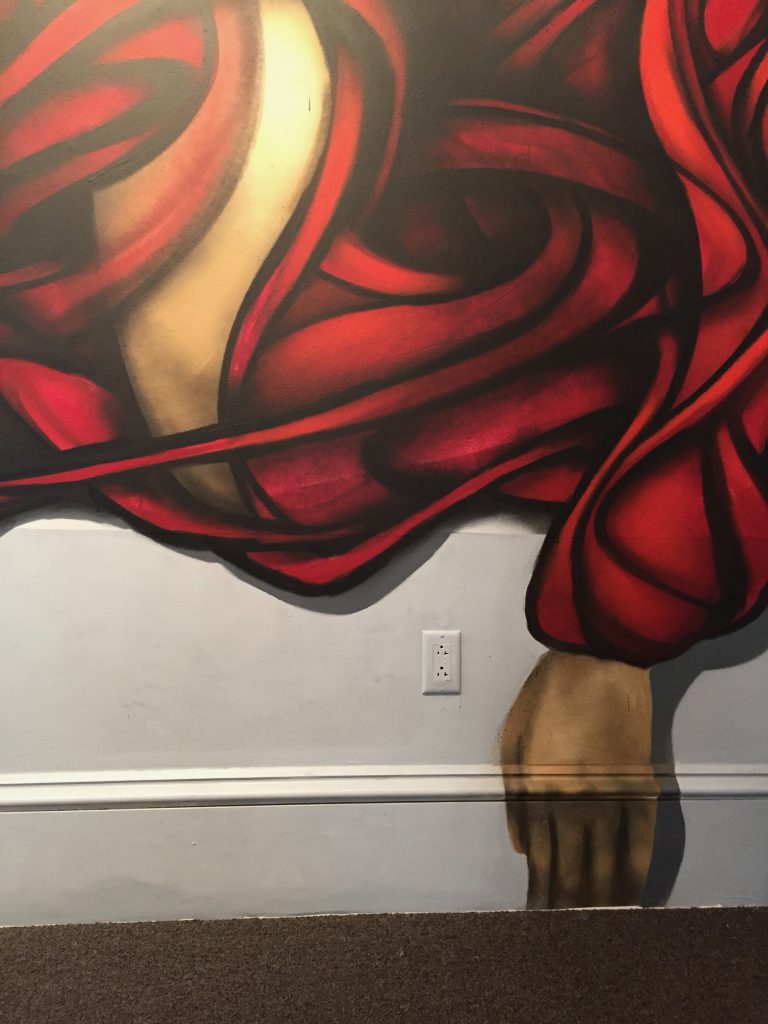 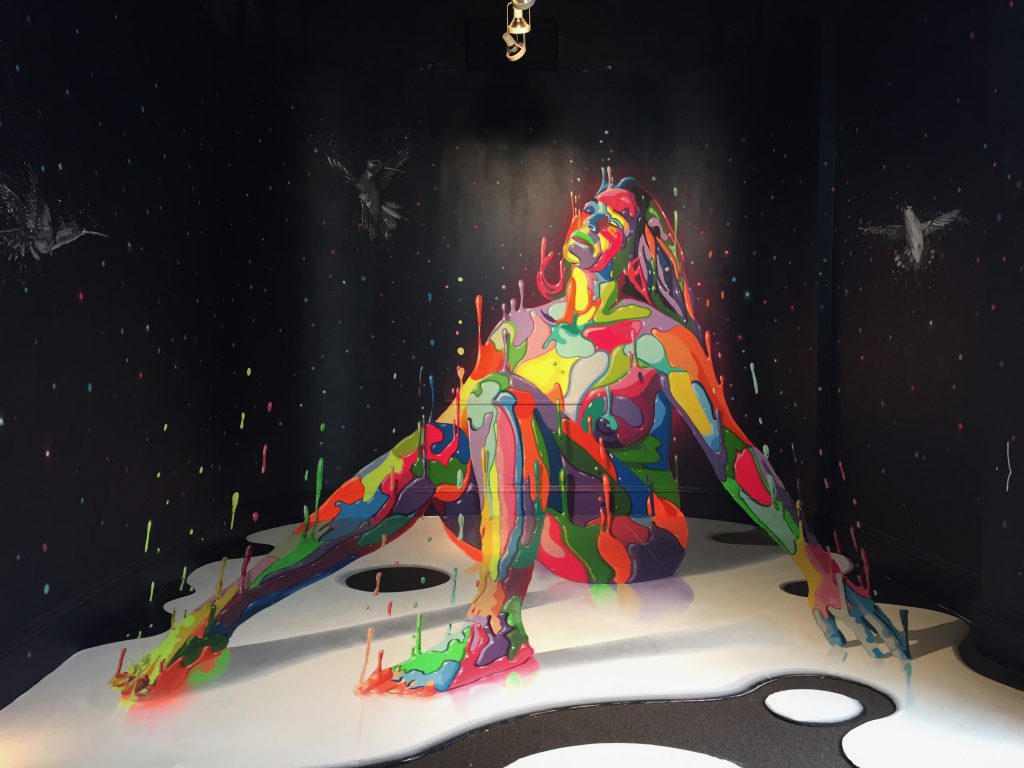 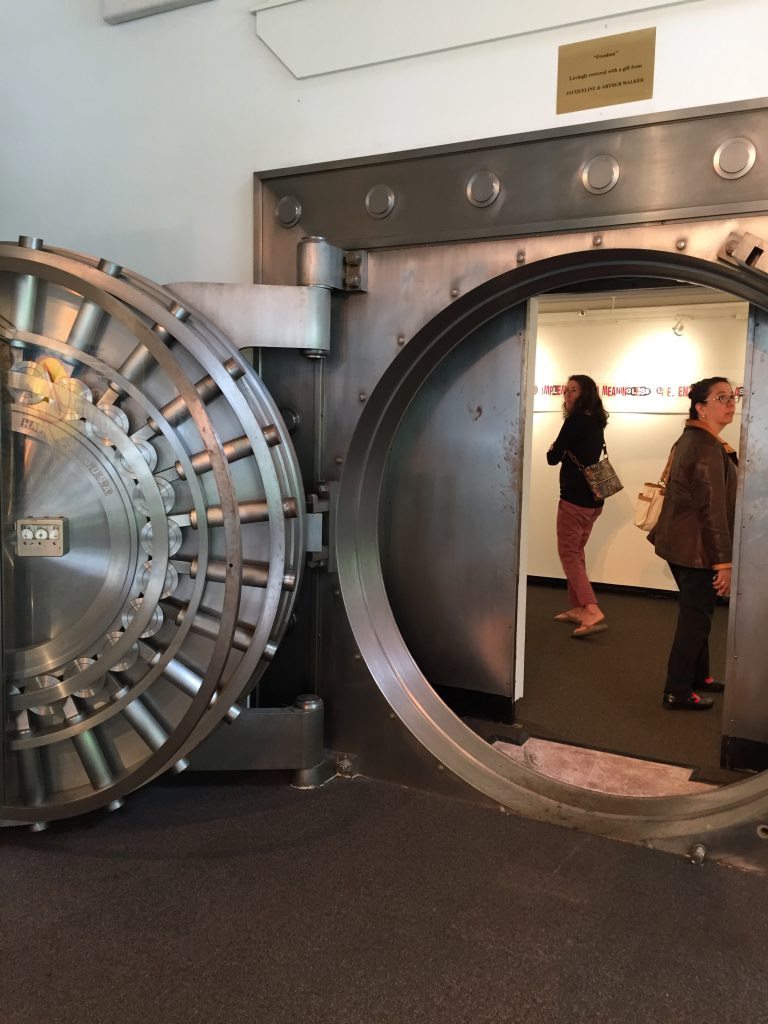 The ArtsWestchester exhibit space features several new installations for From the Streets, many of which will be painted over once the show ends. 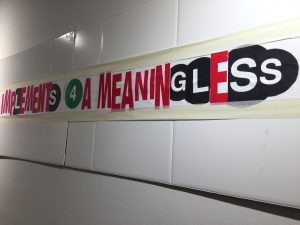 The work ranges from two-story-high murals to a subway-lettering poem around the inside of the old bank vault, and includes sculpture, film, photography, and 3D-effect art. Curators Marc Leader (@212arts) and Melissa McCaig-Welles (@mccaigwelles) highlight those “pioneers of the movement to the present day as well as those who have lent themselves as trendsetters, tastemakers and proponents of social change.” 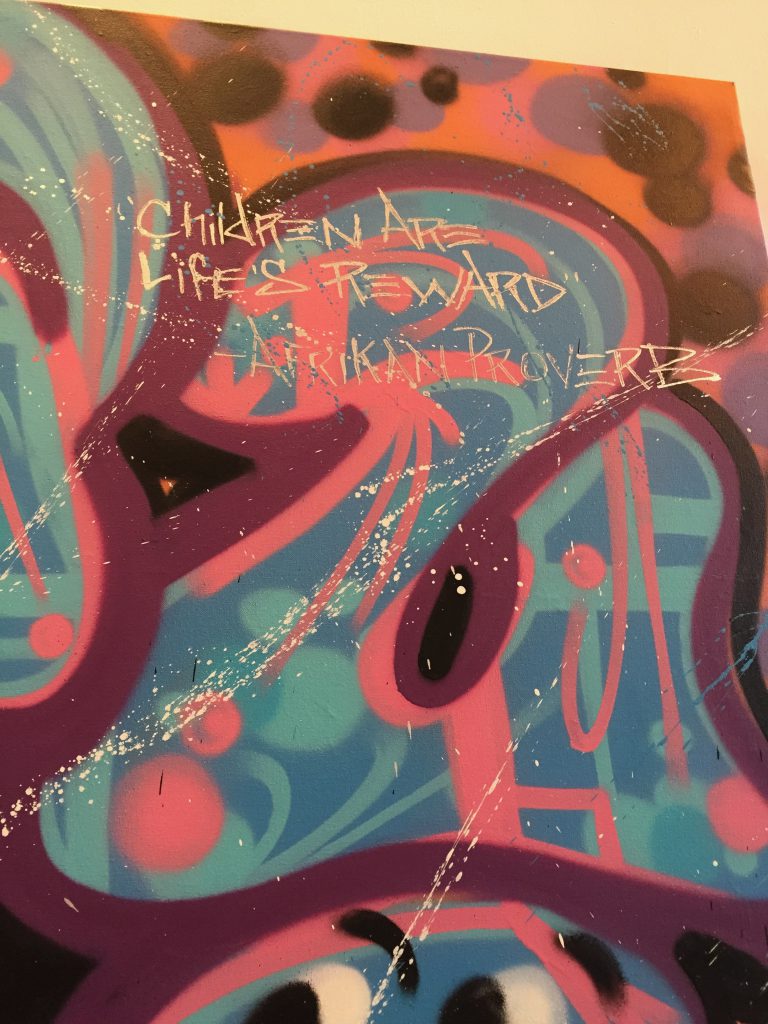 The exhibit presented by ArtsWestchester’s Folk Arts Program runs through July 15. Check out artsw.org for more information. Hope you can join us on Saturday, July 8! 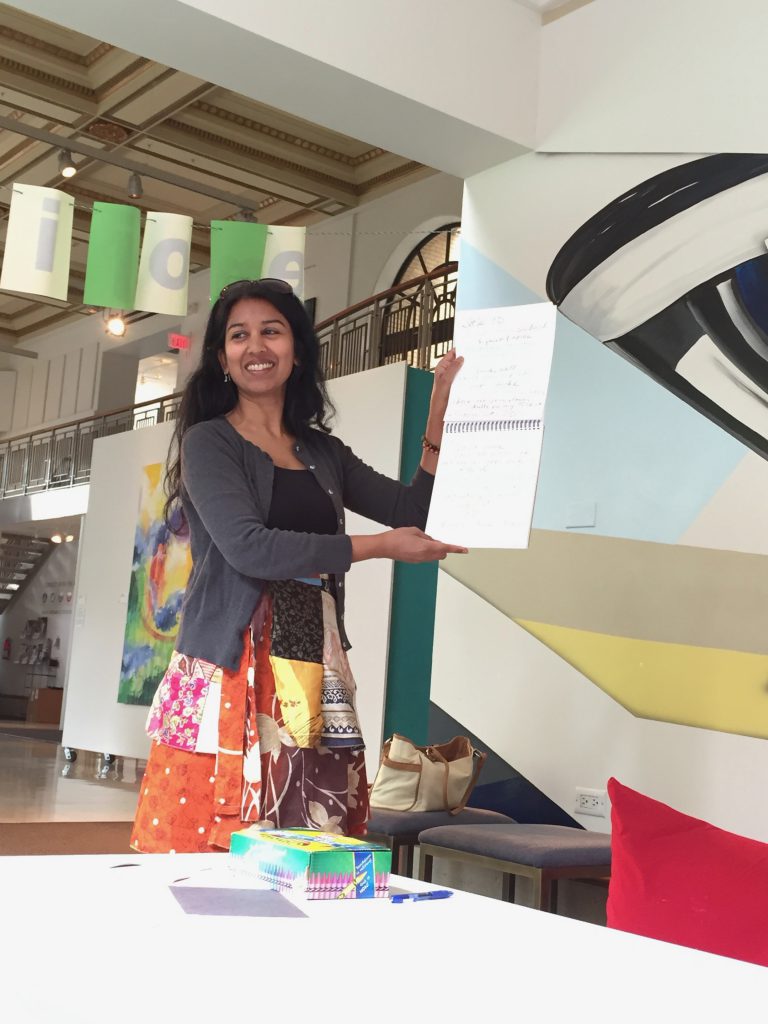