I saw someone outdoors wearing a t-shirt with a print of the Mona Lisa painting by Leonardo Da Vinci the other day, and it made me unreasonably happy. Mysterious smile beaming from her soft and confident face. Yes, it’s these face masks, covering up everyone’s smiles, that’s making our public spaces feel strange. Yes, wear your face covering anyway! But what do we do to show our friendliness if not with a smile? What do you do? Cheerful t-shirt, a little wave, a compliment. Maybe we will invent a sound that is not quite a laugh but is more audible than the silence of a smile– a new language for this. Let this speculation (or anything else about sly smiles) guide your writing tonight.

Join us on Zoom for readings from the prompt, along with conversation and connection, at 7pm.

None of our fights ended where they began

Log into our virtual meeting at 1pm here: Zoom meeting

If you prefer to post your work to our blog, visit Submittable after 12pm to upload your work. We will do our best to publish everything we receive.

Deeper dive into the prompt

We were the symptoms, the road our sickness:
None of our fights ended where they began

From “Duplex: Cento” by Jericho Brown in The Tradition (2019)

“[The Tradition] introduces a new form of Brown’s making, the ‘Duplex,’ a sonnet-like series of couplets that includes repetition and, here, is used to devastating effect. In an interview with Michael Dumanis, Brown explained how he came up with the form:

“Since I am carrying these truths in this body as one, how do I get a form that is many forms? I was looking at sonnets, looking at ghazals. I got really interested in ghazals when writing my second book. In ghazals, you take couplets that are completely disparate, then juxtapose those couplets so that some kind of magic happens because of the juxtapositions. So I was like, ‘Oh, if I can take a sonnet and I can take a ghazal and I can take the blues—we’re not gonna get around taking the blues, since I’m black—if I take those three things, is it possible for me to merge them into a single coherent form?’ And that’s how the duplex came to be.”

Does my sexiness upset you?
Does it come as a surprise
That I dance like I’ve got diamonds
At the meeting of my thighs?

Seems like this poem, published over forty years ago, will never get old.

Now it is Memorial Day weekend, a time to keep heroes in our minds, even more than we have been these past couple of months already. While we remember, honor, and give thanks for the sacrifices made by heroes for the sake of civilization, I thought it might make a good writing prompt, especially as we are often busy with heroes in our stories and poems. Perhaps consider the ways in which you yourself have been heroic in this dark time. Here are a couple of quotes that might set you off on an adventure…

from The Hero with a Thousand Faces, Joseph Campbell

“Civilization is not mere advance in technology and in the material aspects of life. We should remember it is an abstract noun and indicates a state of living and not things.” –C. Rajagopalachari

from Woman, Native, Other, by Trinh T. Minh-ha

Join us on Zoom at 7pm for our virtual salon of readings and conversation.

Consider anything difficult you may be writing—or avoiding writing, whether fiction, nonfiction, or poetry. Distance yourself and look at it from a completely different perspective; free yourself, for a moment, from the gravity of your difficulty. Try writing it from a bird’s eye view.

Log into our virtual meeting at 1pm here: Zoom meeting

If you prefer to post your work to our blog, visit Submittable after 12pm to upload your work. We will do our best to publish everything we receive.

Deeper dive into the prompt

Colum McCann’s Apeirogon deals with intimate aspects of the Israeli-Palestinian standoff along the West Bank. There is very little upon which any two people may agree about this particular political and human situation, except that it is very difficult to talk (or write) about.

McCann balances the extreme vulnerability and hurt of the book’s main characters against a literal bird’s eye view of the region, loosely following the migration of birds.

Protip from Lynda Barry: Spiral Your Way In

Before I begin writing, I set a timer for two minutes and I draw a slow, tight spiral and I let my mind’s eye drift to scenes . . . I just draw the spiral and drift. I set the timer again and make a list of any of those scenes and any other scenes that come to me. I look for scenes I can picture like snapshots. Things I was doing, places I went, where and what and who.

I like oysters, but not everyone does . . . and regardless, I don’t aspire to interact with the world as if it were a legless, semi-ambulatory saltwater mollusk that is only .01% likely to spit pearls. Meet me in the morning with wild tail-thumping and sloppy kisses; ask me for walks, food puzzles, and belly rubs; if I show up to play, let the world delight and surprise me with all the ways in which it is good!

What beast of a world do you (or your fictional characters, or your poetic persona) wrestle and play with? Or do you slurp it up with a little cocktail sauce and a squirt of lemon? 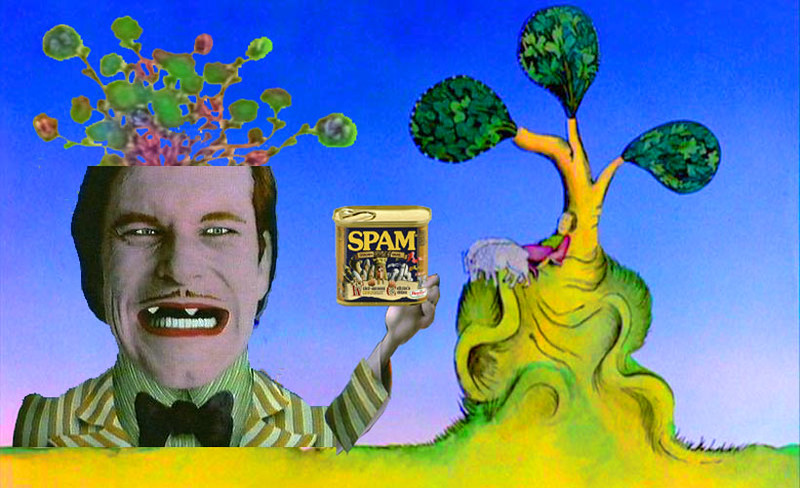 Back in January, before the pandemic, we lost a Python.

Writer, director, and Chaucer scholar Terry Jones was perhaps most famous for his portrayal of Brian’s mother in Monty Python’s Life of Brian—“He’s not the Messiah, he’s a very naughty boy. Now go away!”—and as the purveyor of, er, craft street food featuring SPAM.

In Terry’s honor, the illustrations for this post were offered as a prompt for write! in late January, 2020. Participants at the writing circles, as they so often do with the prompt, made SPAM their own.

END_OF_DOCUMENT_TOKEN_TO_BE_REPLACED

Maybe we all agree that resilience is a necessary component of our collective weathering of this pandemic and its fallout. I’ve read many different pieces of advice on how exactly to develop this resilience though, and it occurs to me that this would be difficult to prescribe in some universal way. But one of my favorites from this week was a post from the Rubin Museum of Art in their “Daily Offering” series, in which classical Indian musician Roopa Mahadevan of Brooklyn Raga Massive reminds us to look to the voices of our elders and to the arts of the past to find “a connecting thread of resilience, of beauty, and of hope.”

The prompt for today’s writing is to engage with a work of art, writing, or music from your heritage, representing a wellspring of the wisdom of your elders. Let that thread lead you into a newly imagined world, as you write in any genre you wish. Then join us at 7pm on Zoom for readings and conversation. Here’s the link to the talk and performance posted by The Rubin, if you wish to listen and be inspired, nourished by the music, too.

Hello! In case you haven’t received Meetup or Facebook notifications about it, this Friday’s write! (Virtual Barat House), usually happening from 12-2pm, is cancelled. Donna will be attending her son’s virtual college graduation! (The New School Class of 2020, BFA in Design Technology, for anyone who’d like to know . . . ) And Maureen has a conflict as well. Hope to see you next week.

Fill in the First Line

I’m insanely proud of my son, a new college graduate, who is designing an educational game about democratic electoral systems, based in part on Mad Libs, to promote the idea that the power to vote should make you happy (kids these days . . .). In his honor, below are a few first lines from novels, partially eviscerated for your creative enjoyment.

Fill in the blanks and use the prompt to inspire your work in any form (poetry or prose; fiction of any genre; creative nonfiction, essay, or memoir).

★The sky above the NOUN was the color of television, tuned to a(n) ADJECTIVE channel. (William Gibson, Neuromancer)

★Ships at a distance have every PERSON’s NOUN on board. (Zora Neale Hurston, Their Eyes Were Watching God)

★As I was a stranger in PLACE, I knew nothing of the splendor of its GEOGRAPHICAL FEATURE, nor of NAME, the Harbor City, whose lights and colors spill into the ocean like a NOUN. (Sofia Samatar, A Stranger in Olondria)