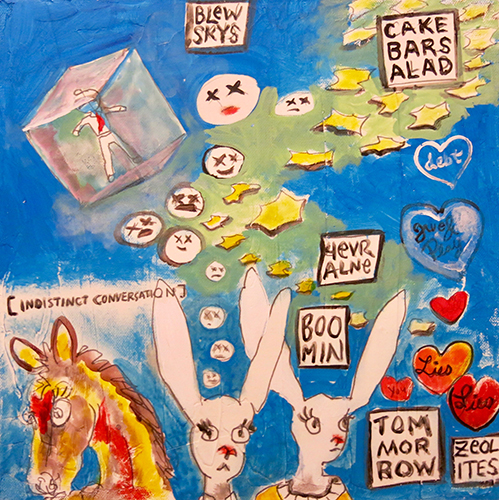 I was born in December, which means I’m a Sagittarius. They’re supposed to be blunt to the point of rudeness.

When I was a kid, I informed my mother about this aspect of my horoscope. She said, “Yes, that’s true.”

My dad often told me that he knew I didn’t lie, which made him proud. For most of my childhood, I am not sure if I actually was incapable of lying, or I just didn’t have any interest in it. I never cheated on an exam or on homework. I never stole anything.

I did lie through omission sometimes; I remember when I was in third grade and had to switch seats with this boy who was always made fun of me and encouraged other boys to be mean to me, too. He had written under his name tag on his desk: “General. Captain. Hero. Man.” I erased all those things and replaced it with, “Stupid”. When we returned to our seats, that boy stared crying, and my teacher asked me, “Was it you?” I just kept coloring, but I never said No.

I had a teacher in fifth grade who had long nails, short hair dyed purplish-red, and a large stomach. She always wore dark pantsuits. She said that if we told boring stories in class, she would start yawning and that was a sign to stop talking. We had to pay a nickel into a jar if we said a bad word, forgot to push in our chairs, or said, “one hundred and fifty” instead of just “one hundred fifty.” That teacher promised to use those nickels to buy us a pizza party every quarter. I thought the whole thing was a little backwards. This teacher once assigned us a long list of thirty or forty vocabulary words and we had to fill in the definitions after looking them up in the dictionary. Of course, I forgot about this assignment until the day before it was due; that wasn’t a lie or intentional, I often totally forgot about things like that. I was always forgetting books, and jackets, and wallets, and chores and homework.

To make things worse, I had poor hand-eye coordination, which made homework harder. My teacher the year before had made me stay in once a week from recess to practice handwriting because mine was so bad. She had thrown my desk on the floor in front of the class and dumped out its contents because it was so disorganized and my handwriting was “chicken scratch.” I’d even taken special classes with an occupational therapist—a woman with curly blonde hair who tried to teach me to cut straight lines with scissors. But it hadn’t improved my handwriting, so the summer before fifth grade, my parents bought me a computer. They asked the teacher with the long nails and the purplish-red hair if it would be okay for me to type assignments so I wouldn’t get marked wrong just because the teacher couldn’t read my handwriting. This teacher agreed that was fine.

I tortured my poor mother the night before that vocabulary assignment was due as she helped me use the computer to type each dictionary definition. Once it was finally printed out we were both stressed and tired, but it was still better than me trying to write it out by hand.

The next day, I walked my assignment up to the teacher’s desk. Her head snapped up when she noticed the clean white printer paper.

“You cheated!” she insisted. “You used your computer’s dictionary!” She screamed it in front of the whole class.

I was dumbfounded. I didn’t even know computers had dictionaries.

“We’ll see what grade you get on the test,” she hissed at me.

She took me out of the room and stood over me, putting her palm on the wall over my head—I was a short chubby kid. I didn’t like this, so I ducked under her arm. She grabbed my shoulders to stop me from moving.

“Did you cheat?” she kept asking me.

I imagined her digging her nails into my bones until I started to bleed. It reminded me of that song kids sang to each other at camp, the one that supposedly put you in a trance:

She didn’t end up stabbing me, but she nearly failed me in English and Writing, and I had to go to remedial English class in sixth grade.

I didn’t lie. It wasn’t honorable. I felt very imperfect all the time, but at least I had that. Why couldn’t she just believe me?

In my fifth grade class, with that same teacher, there were girls who wanted to set up a fake dating game using some nineties computer program precursor to flash, a kind of fancier version of PowerPoint. They were going to set up a profile for each girl in the class. When they came to me, they asked me to tell them my favorite color.

I was so angry. How dare they ask me something like this? I thought the idea of this dating game was so dishonorable, so awful. It was almost as bad as drooling over posters of boy bands, another activity I couldn’t fathom.

“Her favorite color is white,” someone said. “Just put her as white.”

No it wasn’t. That was the worst color. I liked bright, deep colors that you could fall into, that you could swim in if you just closed your eyes and let go. I liked colors that reminded me of the feeling of spinning; when I was smaller I often spent whole recesses by myself, just spinning in circles and falling down.

I couldn’t lie and pretend to like the things I didn’t. Anyway, no one would pick me in their dating game. The boy I liked wouldn’t even let me join his club to draw pictures of aliens.

I couldn’t even lie out of politeness. One friend had a big dog, a grey mastiff. I didn’t like how the dog jumped on me, and how my friend’s family didn’t walk her enough so she pooped huge piles of shit on the porch, and I said so. One time when I slept over this friend’s house, a big black bug crawled from under the blankets. I can still remember how meaty it was when my friend squished it and how it left a streak of red blood on the floor. After that, I told my friend that I didn’t want to sleep over her house because it smelled bad. I hurt her feelings, but I couldn’t stop myself.

In senior year of high school, I had a different friend who was convinced that this guy from a Japanese boy band was in love with her and that this was different than her crush on Justin Timberlake. She said she wanted to kill herself because she’d never had a boyfriend. I told her she was being silly, and she was young and had plenty of time. I’d never had one either.

I heard that often. Even while waiting to ride the roller coaster (and I loved roller coasters) people would ask me why I didn’t express excitement. “Does anything make you happy? You’re like a robot.”

But I had feelings. That same third grade teacher who scolded me for writing “stupid” on the stupid boy’s desk also scolded me for crying too much when I got frustrated. “If you start to feel like crying,” she advised me, “just repeat, ‘I won’t cry,’ in your head, over and over.”

It took me years to learn enough lying to make small talk, to gain some control of my emotions so they were expressed more appropriately, to smile when I didn’t want to, to accept hugs or affection when I didn’t want them because I didn’t want to offend other people. I have to stop myself from talking too much about things I don’t think other people are interested in, to not nitpick over tiny factual errors, to not fidget so much, and move in weird ways too much in front of people; I still catch myself staring too long into the distance or moving my hands when I get lost in fake conversations in my head.

Lying isn’t always bad, I realize. We need little lies sometimes to check ourselves, to smooth things over, to keep social contracts. But even now, my sense of honesty will only permit so much.

As an adult in my twenties, when I lived in South Korea, an older male Korean friend told me that I was too honest to date a Korean man. “You have to lie a little bit,” he said. “You have to dress up, and pretend a little. You can’t just be how you are.”

“I’m not interested if that’s what it takes,” I told him. I was already lying just a little bit each day, trying not to be too weird of a foreigner in this new culture that emphasized proper behavior.

Even back in America, that feeling never totally goes away.

That fifth grade teacher I didn’t like once got on my bus when I was in seventh or eighth grade. The bus driver asked her if any of her former students were there. She looked right at me.

I was glad she lied then. But maybe it was kind of true, what she said; to be a real teacher and student there has to be a level of respect, of love. And that wasn’t there.

Featured image, “in a world of [indistinct conversation]“, courtesy of torbakhopper