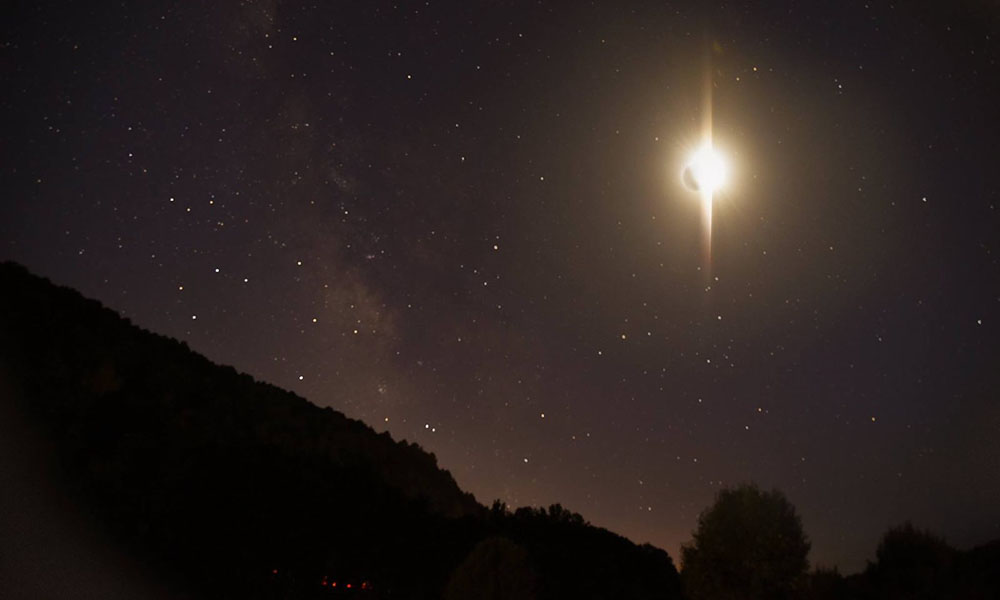 Two years ago, I drove a thousand miles down to the Great Smoky Mountains to make a photograph of the Great American Eclipse.

She came with me, and we drove through two nights, slept in a parking lot in Tennessee, woke covered in dew. Sat in a line of traffic down the highway as long as the continent, everybody in America having the same idea, making their way to the same spot, to see the same thing.

We found a place along a crowded ridge—a soft embankment with a tall flush of old, soft mountains looming right above. Territorial animals, we sharpened our elbows, our neighbors sharpening theirs: an Amish couple, a dog with only two legs, both on the same side, and two young people just married, he in his white suit, she in her black dress. I don’t know how the Amish or the dog managed to get there.

We were joined by a family of bears—a mother, her two cubs, but no father—that deadbeat had lit out as soon as he’d done the deed. They heard the commotion, smelled the food, but couldn’t read newspapers or tune radios, and didn’t know there was a solar eclipse, a common but coincidental miracle, on the way.

The bears would shamble down from the hills and park rangers, standing in the road below them, would make big noises, send them scurrying back, but then an hour later they’d mosey down again, and the park rangers would yell and bang things and make low belly sounds and off their nemeses would go, back up through the stones.

We camped out there for nine hours, waiting, as the bears arrived more and more frequently, until finally a ranger went to a shed somewhere to get some firecrackers. He came back with his arms full of daytime effects, small little things: cherry bombs, ash cans, sparklers, snaps, snakes, pops, smoke balls. He handed them out among the rangers.

When the eclipse finally came, it lasted for thirty-one seconds, as the park rangers, in a frenzy, threw one firecracker after another into the road, while all the rest of us—she, I, the ambulatory Amish, the halfdog, the newly betrothed, and three sky-black bears—stared up at the almost-sun in silence.