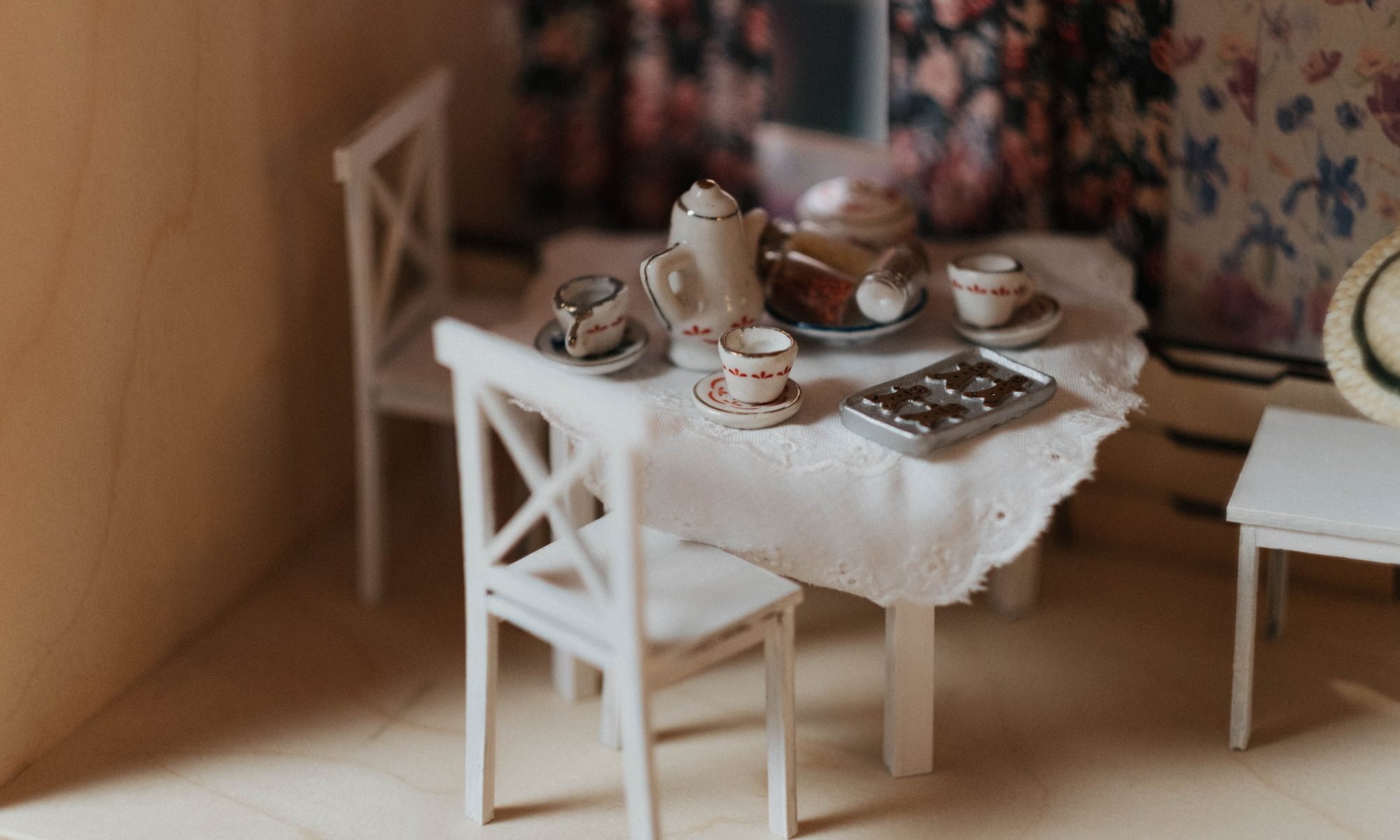 What is so satisfying about a doll’s house? The fantasy that I could become small and have everything I need—rugs on the floor, tables and chairs, bedsheets. The excess of the house is that it exists at all, is purely a plaything. My own full-sized house is like a protective extension of my body. It needs repairs and cleaning, but it keeps me dry and I can lock the doors at night. Imagine the horror if the entire back wall fell away.

As a child I spent hours poring over library books of dollhouses—collector’s guides, instructions for building furniture. Everything miniaturized. As a child I wanted to escape my own house as much as I wanted to escape my body. What is so satisfying about a dollhouse is exactly what is satisfying about a doll—it imitates the real without being real. That imitation is also what is terrifying about a dollhouse, just as dolls are terrifying. How simple life would be inside a dollhouse! What a horrible life. One of the arguments for rigid gender roles is that they allow everyone to know their place in society. Inside a doll’s house everything stays put. A doll is exactly a doll.

Remember the Beatrix Potter story Two Bad Mice? The mice break into a dollhouse and steal things. They are horrified to discover that the food in the kitchen is not real food. The story is so satisfying because of the twin love and horror the mice feel for the dollhouse furnishings. The feather pillows are so perfect, the porcelain fish so evil. The mice end up smashing the contents of the kitchen but return with a coin to pay for the damages.

I would like to return to the imaginary dollhouse of my childhood and leave a coin—something for my child self to pick up between thumb and forefinger. Something to tell my former self that I survive and will return to pay back the damages I would cause to the house of myself.

It shouldn’t be surprising that others struggle to read me as queer, when I struggled to see my own gender and sexual orientation for so long. What is there to say about how my identity is distorted, misread, or seen by others?

I want to be read as queer now, but in the past I did not. The elements of my presentation that I thought of as attractive were so coded as feminine that I didn’t think it was possible for me to be desirable if I presented as more masculine. Once, someone I’d just met told me that I could not be gay. Maybe it was the way I dressed or the way I carried myself. It could be that I never felt right presenting as femme. That I didn’t have confidence in presenting as femme, as someone who had examined their presentation and cultivated a queer femme identity. Maybe that lack of confidence in my femme presentation was read as straightness. Because femme doesn’t equal straight. Sometimes, passing a mirror I don’t recognize myself. I believe this is common.

Growing up I had no access to queer culture. I was raised by Calvinists, first as a young child in Michigan, then as a teenager in Latin America. We didn’t even watch TV until I was fifteen. I wanted to be a boy, or I wanted to be a hero like the boys in books I read, or I didn’t want to become my mother. She seemed so unhappy. I both was and wasn’t a girl. I never wanted to get married or have children. But I also never saw anyone like myself.

A dollhouse is such a gendered plaything—the realm of the imagined domestic female. Gender is something I have both struggled to fit into and struggled to get out of my whole life. I would like to see gender as something as imaginary as a porcelain fish. A porcelain fish is made to represent something that is nonetheless real. Gender, though, is an imaginary that represents more imaginaries—the basis of family, society, religion.

A dollhouse helps a child sort out society. This is the dining room; here is the table where we eat; here is the doll family sitting down to eat—mother, father, sister, brother; here are their plates. A dollhouse is about exerting control over a small domain. The pain of a dollhouse is that the child can never really enter into it, can never really embody that life. This, I think, is precisely the pain of gender in my life: try as I might, I cannot enter into that imaginary realm. Neither, though, can I keep myself out of gender, no matter how hard I try. It exists around me, an imagined city.